BodyTalk Therapy
​Works For Animals Too

​BodyTalk for Animals celebrates the compelling bond pets share with their families, the role they play in the lives of their humans.

​An energy-based therapy, it complements veterinary care by helping animals deal with stress, adapt to change, and release stored emotions that can lead to chronic health issues and behavior problems — concerns veterinary care may not be able to address. 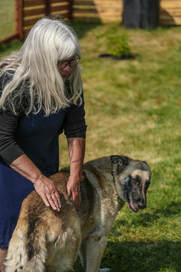 An animal’s health directly relates to that of its pack. Many animals take on physical, emotional and energetic issues of the humans they are closest to help lighten the load. Treatments are safe, noninvasive, and gentle to the client – your pet – and informative to you, the human. It helps you to get to know rescue animals and supports their process of calming.

BodyTalk for Animals works on relationships, reduces stress and anxiety, increases well-being and deepens your relationship with your animal. It’s amazing with rescue animals. Take it from me. I have two of them.
​
The combination of energy work for both you and your animals offers the most significant results.

Animals receive energy work at a distance more efficiently than humans. They don’t have the belief systems that say "This can’t work,"  are able to just receive.

Domestic animals are slightly more difficult ro reach because they are so influenced by our energy fields, attitudes, and belief systems. But, just the same. They do respond more freely than their human housemates

Here's an experience I had working with a household of cats (5+!) being moved from the Middle East to Montana. I had worked with individuals from this group a few times over the years. Their human used to drive to Bozeman for sessions. So, when it was clear they would all be moving back to Montana, I was asked to help with the trauma and stress of that.

In writing about sessions, I keep details intentionally vague so the client’s household remains anonymous. In beginning to support them in this move, I  checked in to see when would be the best time to deliver a session. Generally, that’s something like 3 days before the move, not a specific date. Then, I’ll do a series of ”formulas” to unfold over time. In this instance, I also needed to work with my human client to support her in her concerns for her feline household.
BTW: everyone arrived safely. Some individual cats already had health issues and their owner was looking forward to being able to take them to an American vet. I continued to support those on-going individual health issues.